Youngsters having a ball with launch of Kingswood United It’s game on for over 140, four to 12-year-olds in Kingswood who have kicked off this year’s football season representing the area. 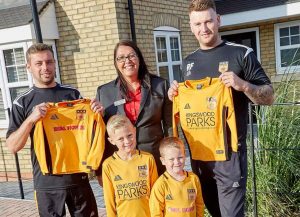 When Paul Richardson set up a soccer school earlier this year, with sponsorship secured from Beal Homes and Kingswood Parks Development Company (KPDC), little did he know how successful it would be.

A Facebook post inviting local families to bring their children along for a kick-about on the primary school pitch attracted 70 children to the first session, which very quickly turned into four separate sessions.

“It’s great seeing them play with their friends, enjoying something, making new friends and getting out and about.”

The club also recently achieved FA Charter Standard status and is a recognised Youth Development Club, with ambitious growth plans for the future.

Paul said: “FA Charter Standard status involves making sure all the volunteers are qualified and putting together a five-year development plan. The plan is to have 30 teams in the next five years.”

One area which is really going from strength to strength nationally is women’s football – something which is being seen at Kingswood United, where they are now looking to recruit girls for an under-8’s team.

Paul said: “The girls’ game generally is increasing, partly thanks to the recent success of the Lionesses. We’re seeing the benefits here, with loads of girls wanting to join the four girls’ teams we have at Kingswood United.”

Beal Homes has sponsored the Kingswood United Tornadoes Under-7’s team kit and helped with footballs, goals, bibs and kits, as well as covering the cost of hiring space at the school.

KPDC has also sponsored the Kingswood United Storms Under-7s team kit and helping towards the cost of equipment.

Visit kingswoodunited.co.uk for more details about how to get involved.