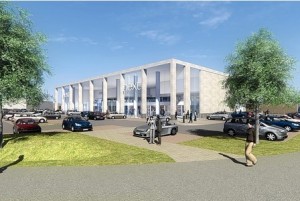 Work has started on a new £12m flagship store that will be built close to Kingswood Retail Park, providing 220 jobs.

Retail giant Next, which is set to build a new home, clothing and garden mega store, had planning permission approved by Hull City Council in November to start building.

Work has started to prepare the foundations on the site, with diggers now visible on the land between Runnymede Way and Ashcombe Road.

The store is set to replace the existing Next fashion store in the retail park and will have an in-store café, becoming a shopping destination in its own right.

The impressive new two-storey Next store is set to be home to one of the largest home and garden centres in the area, with a planned car park providing 280 spaces.

The new development is aimed to be open for Christmas 2016, and will stock a range of products including women’s, men’s and children’s fashion along with various household furnishings.

Substantial improvements to the roads near to the Runnymede roundabout will be made, with the current carriageway made wider to allow more traffic to flow easily.

Jobs available at the new store will include both part-time and full-time work, as well as offering apprenticeship schemes for school leavers and a 12-month training programme for people under
25.

Watch this space for more details!