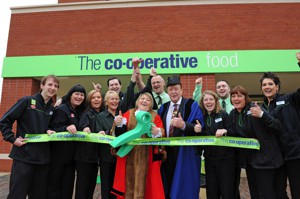 The hotly-anticipated Co-op store has opened in the new Kingswood Parks Village Centre, much to the delight of local residents.

The 3,000 sq ft supermarket’s launch was attended by dozens of people to see Deputy Lord Mayor Anita Harrison cut the ribbon to officially open the store.

The new Co-operative store now joins the pharmacy and hairdresser in the Village Centre, with a café and an estate agent set to open within the next few months.

He said: “Once the new houses have been built around us, we will be situated right in the heart of Kingswood and I think we will see a lot of people use us because we are in a convenient location and we have such a wide range of choice.

“I have already spoken to a number of residents in Kingswood who have stated their delight at us being here and the people who have come through our doors are impressed at what we have to offer.

“We are in an impressive location and I am sure we will be an integral part of this thriving community.”

The new store includes a fresh fruit and vegetable aisle, a wide variety of beers, wines and spirits and fresh bread made on the same day. There is also a free-to-use ATM next to the entrance of the store.

Upon opening the store, Deputy Lord Mayor Anita Harrison said she was delighted to have a community-focused retailer such as The Co-operative in Kingswood.

She said: “I am very pleased to have been asked to open this new Co-op, a retailer which holds values close to my heart.

“It is a company with the community in its mindset and is focused on social responsibility – it is a company which keeps close to its ethos. This new store not only creates new jobs in the area, but it also demonstrates the faith retailers have in this area in the city.”

The Co-op will be open until 11pm every day.