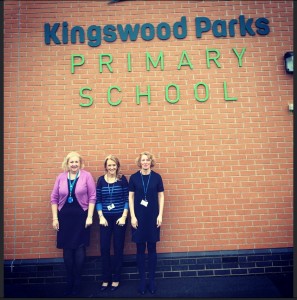 Mrs Drinkall said: “We are grateful to Carolyne for establishing a strong foundation upon which to build.

“Being a principal is about having belief, resilience and never being satisfied – always striving for better. It’s about supporting and challenging both staff and pupils and ultimately believing in them.

The children at Kingswood Parks are delightful and hardworking. We will continue to support the school in a part-time capacity until a new Principal is appointed.”

Kingswood Parks was built in response to the increasing number of children now living on the Kingswood Parks development, and was opened as a sponsored academy in September 2014.

Jan Drinkall and Helen Miller, the respective principals of Highlands and Bude Park have had a successful and long established working relationship and are delighted to be supporting Kingswood Parks.

Highlands and Bude Park teachers have a wealth of experience when it comes to supporting schools across Hull and the East Riding in delivering sustained school improvement.

Mrs Drinkall is a National Leader of Education and for a number of years has worked closely with the National College for Teaching and Leadership. She said: “Between Highlands and Bude Park, we have a depth of experience and expertise including more than 10 Specialist Leaders of Education.

”More than 300 children now attend the popular Kingswood Parks Primary School, with the Foundation Stage and Years 1 and 2 now full to capacity, meaning the school cannot admit any more children into these year groups.

“The new school has seen a very positive response and the only places available are in Key Stage 2 (Years 3, 4, 5 and 6). We understand parents, particularly in the local area, are frustrated by this, but we are working with the Local Authority to increase the school’s future capacity.”