Jack switched our Christmas lights on with pride 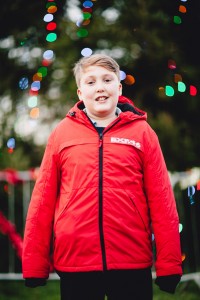 A true sense of community spirit was created in the Village Centre of Kingswood Parks at Christmas time.

The event celebrated the community spirit KPDC has strived to create since the launch of the new Village Centre.

Now, it’s clear to see that residents are embracing being part of the community and KPDC was delighted to see so many residents come along to support the lights switch-on.

Year 4 student Jack Harris did the honours of turning on the lights for us this time around.

Before the event, he said: “I’m so excited to turn on the lights, I can’t believe I’ve been chosen. I’d like to thank everyone – I feel like I’m famous.

“I was chosen because of a tree design I made at school – we were learning about circuits in class and I used my skills from that class to think of the Christmas tree lights to create it. It took me two days to do.”

The children also took part in a fun Christmas treasure hunt, which led them to various clues around the Village Centre.

A spokesperson for KPDC said: “We anticipated a huge amount of people attending the event, especially after the success of our summer event which celebrated Kingswood Parks’ 20th anniversary last summer – and we were right!

“When developing the Village Centre, we aimed to create a community hub which would have all the amenities residents need on their doorstep. We are delighted to see the Village Centre continue to grow in popularity and watch our vision become a reality.”