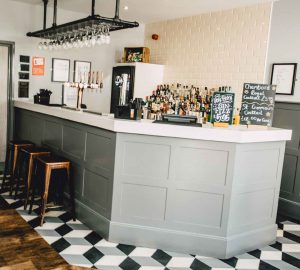 The Village Green Cafe Bar has become a fantastic destination not just for local residents, but visitors from further afield too, since its expansion last December into the unit next door.

The growth has allowed the business to add an additional bar area where people can simply enjoy a few drinks without having to reserve a table, with guests also enjoying a few pre-dinner drinks in there.

The expansion was made possible by the relocation of Beercocks estate agents, which moved to a vacant unit just a few doors down. Beercocks has quickly established a reputation as the leading estate agent for the Kingswood Parks development and beyond, with the move to enhanced premises further strengthening its position and further improving its ability to display the latest properties prominently within the Village Centre.

It builds on the cafe-bar’s strong reputation locally for its delicious menu and fantastic atmosphere since opening in 2015.

Owner Andy Carter, a Kingswood resident himself, said the changes have given them more flexibility: “The expansion has been a success so far, it was definitely the right move for us. We get a lot of local people coming in, but we also get a people from the surrounding areas to come here too.”

The Village Green Cafe continues to be a popular spot for everything from great alcoholic and nonalcoholic drinks through to fantastic quality food.

As the business has grown, so has its number of staff – with 20 now employed in a mixture of roles from serving, working in the kitchen and cleaners.

Andy said: “We had the extension done because a lot of people were telling us they wanted a bar to drink in. It has been good, busy, really busy, and we’ve been very pleased with the response from customers. We would like to thank our loyal customers for their continued support as we’ve expanded and hope it will continue long into the future.”